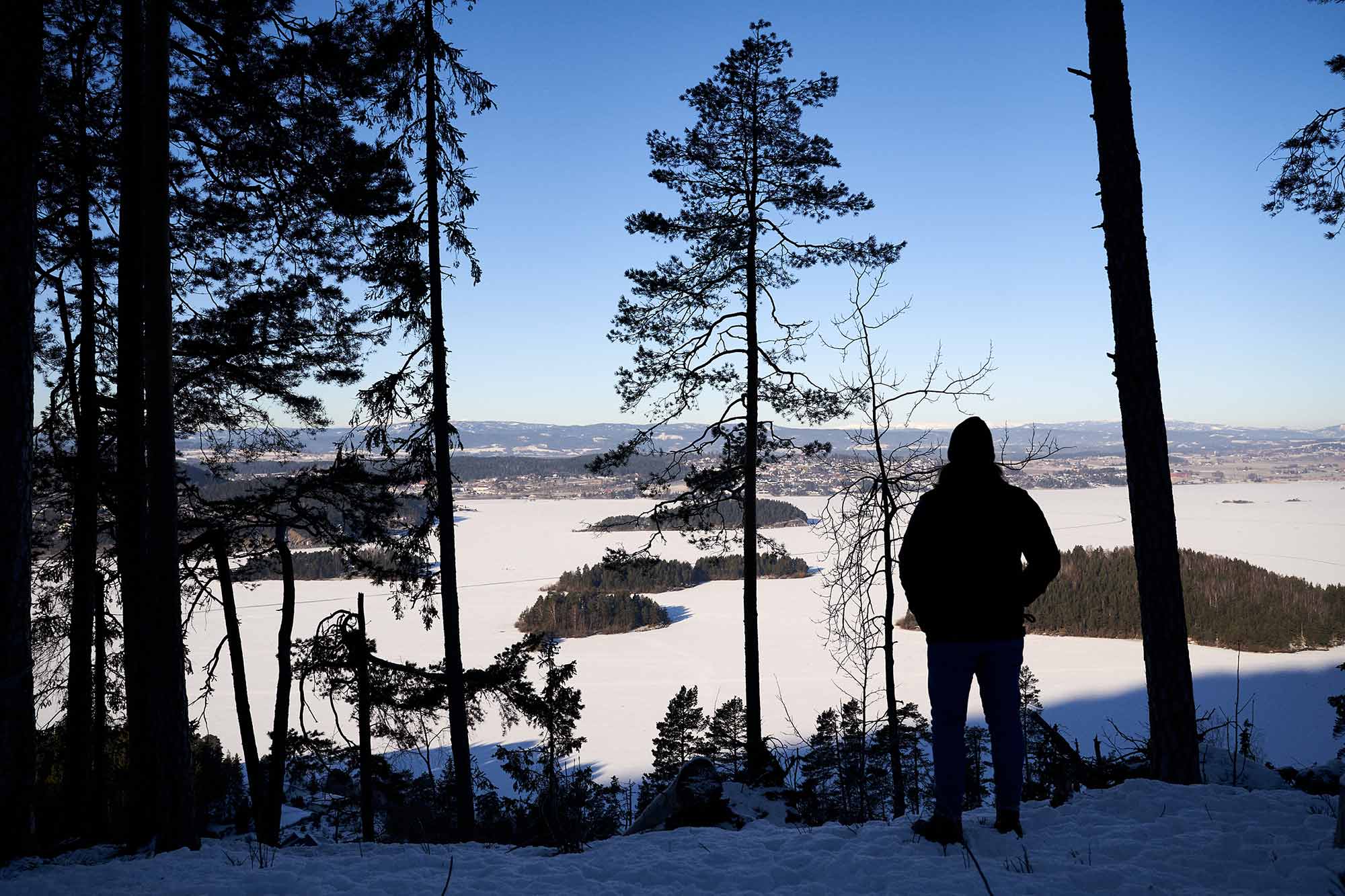 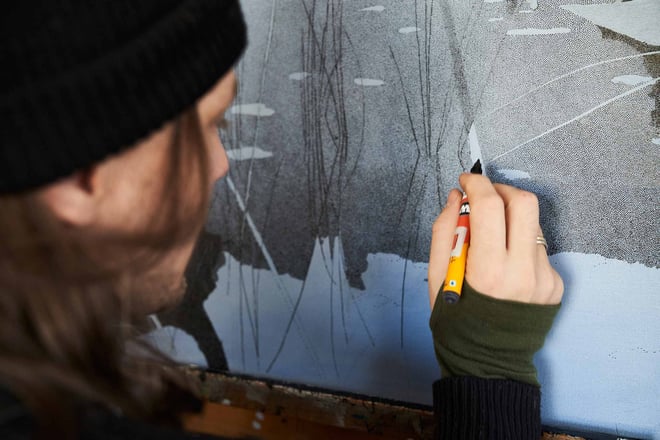 For over 10 years, Oslo-based Danny Larsen was an essential character on the international freestyle snowboard scene. With an impressive roster of sponsors, he travelled the world, featuring in dozens of snowboard films and magazines, showcasing his distinctive style.

Hanging up his boots in 2016, Danny shifted focus to his second passion, artwork, and his highly detailed paintings and illustrations have been exhibited in Paris, London, and Austria, with 2021 seeing his first solo show consisting of 27 pieces at The Kittelsen Museum in Vikersund, Norway, exposing his propensity for shadow and light that captures the majesty of nature.

Speaking to Danny in his countryside workshop, we discuss his transition from the slopes to the studio.

Hi Danny, please introduce yourself to our readers.

I'm an artist, painting my immediate surroundings, focusing on the fundamental idea that everything we experience is truly subjective. Before I became an artist I was a professional snowboarder for about 15 years, and recently it has dawned on me how connected these two occupations are. It feels like it is the same, just the a and b-side of an album.

I'm a family man living on the edge of the forest, where I drink a bit too much coffee and play in a punk band with my high school mate who lives 3 hours away.

How did you go from a pro snowboarder to an artist? Tell us your story...

I reached a point in my snowboarding career where I was offered a bunch of signature products from all of my sponsors. I decided I wanted to do all the design for these products myself, as my two main interests growing up was art and snowboarding. Slowly the design and artwork aspect of my "job" truly became dominant and I realised that's what I was most passionate about. So I called up all my sponsors and said thank you for the ride, but I'm done.

I quit snowboarding and got a spot in an illustration/design collective in Oslo and tried to make it as an illustrator, but I quickly realised that it was art that gave me the same as snowboarding did 15 years earlier. So I focused on that, started doing art shows, both here in Norway and abroad, and it steadily kept picking up speed. So now I am an artist, doing gallery and museum shows, listening to music while I drink coffee and paint.

In your artwork you predominantly use the stippling technique – how comes?

I'm not 100% certain of all the contributing factors, but I do know I had an urge to screenprint a drawing of fog onto a t-shirt as cheap as I could. So it came out of necessity. My stippling technique is based on me wanting to control the process of old-school screen printing. From then on my painting technique has taken on more meaning, but most importantly is the amazing possibilities that open when you work with a very restricted palette, I only used black and dots. To quote Lao Tzu's Tao Te Ching; "Too many colours blind your eyes".

The motives in your paintings are mostly forest and Norwegian folklore, how come?

I think honesty is one of the most important aspects of art, and at the same time, I think being able to focus on the present is the root of most amazing creative processes. I'm surrounded by nature, that's where I live and that's where I walk. This is what I can represent in hopefully such a unique way because it's an honest representation of my experience and my world. All in all, I have learned to see my surroundings with passion each day and to truly appreciate all the boring day-to-day stuff we take for granted.

But it's also worth noting that I have spent all of my life in nature, especially with snowboarding, and I do believe nature plays a way bigger role in our lives than what we give it credit for. So I choose to focus on that positive side, people need nature.

More HÅG Capisco stories - in the studio with Faebrik

Tell us about your studio - How do you like to work?

After I have dropped off the kids at school and in kindergarten, I stroll down with my dog. My studio is about 20 minutes down a path and it’s a great way to start the day by getting to enjoy the ever-changing scenery. Somehow it gives me a proper fresh start to each working day. I get in and brew a cup while my dog jumps up on my cracked leather couch, I sit down on my painting chair and look at how the painting is developing while I lean back and sip some coffee. I think that’s a rather important aspect, to take a step back and get an idea of what is going on rather than relying on where I think it is going. The rest of the day I sit and I paint, relying on music to set the mood to get the right atmosphere for different parts of a painting. Some bushes need Nick Cave while some branches probably need the Ramones.

You’ve been using the HÅG Capisco now for a while – what is it about this chair that makes it a good fit?

Without a doubt the way it supports all kinds of sitting. Sitting in the same position for too long isn’t good in itself, but by moving around, it allows me to get around on the painting effortlessly. It lets me work on my paintings for hours on end where I don't think about the fact that I'm sitting all the time, it's like it is moving along with me.

To a point, it makes sense to compare it to when you get good and the snowboard becomes part of you. Instead of being something you struggle with it is the added part of your body that allows you to jump down stuff that clearly should have broken all of your bones.  And I think that could be the best compliment you can give a work-chair, you don't think about it at all while you're working.

Learn more about the HÅG Capisco

James Dean and all of my musical heroes made it clear, black leather is the coolest. I think that idea is so ingrained in my thinking, I just take it as a law of nature. Clearly there was a lot of interesting options when I picked out the details of my chair, but given that I'm bound to spill paint and coffee, black leather stood out as the best option to wipe down and keep looking good. My first priority was functionality, secondly the aesthetics. Luckily those two matched perfectly.

And finally where can we go to see your art?

My art is exhibited in various art shows here and there with my most recent solo show the 2021 exhibition at the Theodor Kittelsen Museum at Blaafarverket here in Norway. It looks like I'll be doing my next shows abroad, but I'm not much of a planner. I do try to give people a glimpse of my artwork and the process on my Instagram account, so it's a good starting point at least.