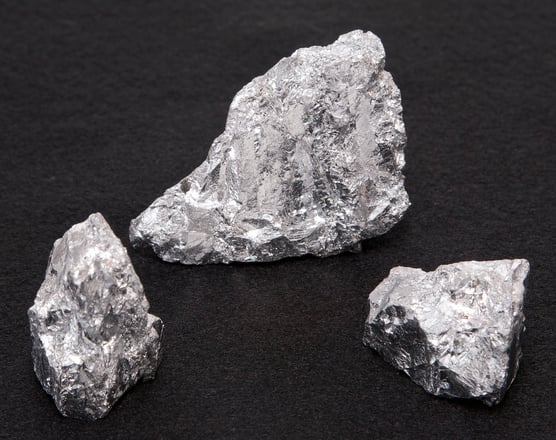 Chrome is a highly durable material, famed for its brilliant shine that is both desirable and hard to replicate. Highly polished, it can reflect almost 70% of the visible spectrum. When added to stainless steel it also provides anti-corrosive properties. There are, however, considerable downsides to using chrome, including both health complications for humans and environmental issues.

Where does chrome come from?

99% of the chrome we use is mined in South Africa, found on the surface of the earth as a chromite compound (FeCr2O4). Other major producers include India, Zimbabwe, Turkey, Russia and Kazakhstan. Iron-black in colour, with a metallic lustre, this compound is put through a chemical transformation process to create chromium. Different processes create 6 types of chromium, from Cr(I) all the way to Cr(VI), with Cr(III) & Cr(VI) the most common when it comes to chrome plating.

When talking about furniture, “Chrome” usually refers to a layer of electroplated chromium, which has been applied to the surface of a material. Applied to metals it makes it highly resistant to rusting, adds strength, and provides an unmistakable lustre. It is commonly applied to chair and table legs, metal knobs and dials, as well as used in welding and mechanical internal components.

The most commonly applied variants to furniture are trivalent chromium Cr(III) and hexavalent chromium Cr(VI). Although Cr(III) is not considered to be a harmful substance, Cr(VI) is. Not only is it highly toxic, but it has also been classified as a carcinogen by the US EPA as well as being heavily controlled by the Restriction of Hazardous Substances Directive and the European Union regulation on Registration, Evaluation, Authorisation and Restriction of Chemicals.

The good news for anyone sitting on a chair with chrome is that you are not in danger of being poisoned. The chrome plating process, no matter what type of chromium you use, results in a harmless product. Where the danger lies is for the people in the supply chain up to that point, and the wider environment affected by the residue and chemical waste created in the process.

The problems with Cr VI

Although Cr(VI) is a known toxic material it is still created and used in all manner of applications around the world. It can be used in the production of dyes, as a leather tanning agent, pigments in paint and during the welding and cutting of other chromium alloys.

The biggest health and environmental complications occur during the extraction and production, with workers at risk of breathing in dust particles or coming into contact with both solutions and solids containing CR VI. In fact, up to 85% of deaths in some mining areas occur due to hexavalent chromium-related diseases, due to exposure and contamination of water.

In addition to this, there are equally dangerous by-products formed during the process, including lead chromates (a carcinogenic, mutagenic, and reprotoxic substance) and barium sulfates (hazardous waste). Even a single instance of exposure to these materials can lead to irritation and inflammation of skin, whilst repeated exposure can cause more permanent damage or even be fatal.

Cr(III), on the other hand, is not considered toxic, and in trace amounts, is even considered an essential element to humans by some. Whilst chronic exposure can still be unhealthy, it is not as important to avoid all exposure during production. However, the mines where Cr(III) is extracted are the same places where Cr(VI) is extracted, meaning that the mining process for trivalent chromium is not necessarily a "safe" alternative, and must be considered.

The problems with waste

Whichever chromium is used, there is always the problem of waste, which can be enormously damaging to the environment. Chemical reduction can effectively remove Cr(VI) from water used during production, but results in large quantities of toxic sludge. Other methods, such as electrokinetic or membrane filtration are also used, but have high costs, dissuading many industries from adopting any remediation methods at all. As a result of this, in some instances, chromium effluents are released into the environment, they pollute waterways, leach into the soil, and eventually enter the food chain.

Cr(III) also produces large quantities of waste, which whilst not as toxic, can still have a negative impact on the environment if not treated sufficiently.

Unfortunately, manufacturers or distributors of furniture which contain chromium are not legally bound to indicate which type of chromium was used in the plating process. Whilst those that do use Cr(III) will often indicate that they do, those that use Cr(VI) will often not, but that is not true 100% of the time. If this is an important issue for you, the only sure-fire way is to ask.

At Flokk, we ensure that none of the materials we use contain or have been produced using Cr(VI). We are able to do this through rigorous tracking of components along our value chain, as well as using trusted and certified vendors. But we also understand that despite this we can do better. Due to the problems outlined above, there is clearly no such thing as environmentally friendly chromium.

That's why we have also started a process of phasing out chromium completely from our designs. Every new product we create features alternatives to chromium, whilst existing products are being adjusted to include more sustainable alternatives without a reduction in quality. So far, we have already conpletely eradicated even Cr(III) from three of our brands, HÅG, RH and RBM. As we work our way through, our other brands will follow suit.

The phasing out of chromium is just one of several ambitious goals we have set ourselves to ensure we are leading the way when it comes to making sustainable furniture. The use of viable alternatives with a reduced impact on the environment is just one way we are working towards more environmentally conscious designs.

Explore our video below to learn more about how Flokk Brand RBM are putting these choices into their new designs.